I wake up in Takikawa exponentially more excited than the day before, knowing that I am now just a mere 3 days away from completion. Unfortunately I am also starving, as I neglected to feed myself anything more than a bread bun filled with bean paste the night before (sounds gross, but darn those things grow on you!). I set out at 6 a.m. in search of a convenience store breakfast and an Italian with a questionable sense of his Japanese geography.

I have a Japanese cell phone, and he has an American one. Both of our phones are extremely powerful and effective in their own way...but neither of our plans allows for the phones to call one another. Relegated now to awkwardly browsing Facebook and sending messages back and forth I find a road that should be the only road on which Fabio could travel to continue on his journey. I hunker down with my egg and rice bowl and wait. And wait. And wait. And wait. I am not sure if I mentioned this earlier, but even though I am 3 days from my goal, I have only 3 days to complete it. While assuming the ride will be flat and easy, where it lacks in hills it will make up in distance. I was hoping to cover 150 km (95 miles) today, but every minute I spend waiting for Fabio is a minute close I could be to completing my journey. With a heavy, frustrated heart, I decide to set off and try to make up for the hour lost waiting for the Italian Stallion (A good name for his bike, whether or not he named it), and set off for Rumoi and the western coast.

While riding today, I learned just how much the rarity of something can account for the awe it inspires in people. For example, we have dragonflies in Colorado, but seeing them is usually dependent on a certain season, and even then sightings are somewhat rare. Riding along today I had the inital pleasure of seeing small groups (flocks?) of dragonflies buzzing along next to me and I was momentarily struck by the beauty of nature around me. Immediately after I was struck in the face by another flock (pack?) of dragonflies heading the opposite direction. I looked up to see what amounted to a cloud of hundreds of dragonflies to my left and right all buzzing around in the pastures next to the road.

What I thought was a rare and cherished sight soon became a vicious game of dodge ball with a tactical squadron of insects. Down from the main formation they would swoop, heading at me with unmatched grace (or clumsiness). Bank left, bank right, up, down SWOOSH by my ear. Here comes the next one, flutter back, dive forward, barrel roll, SMACK in the chest. On and on for miles, the dragonflies and I play cat and mouse. All in all, it was a hilarious and unique way to spend an hour and a half of riding, but as I rode into the final set of hills the swarms petered out.

Finally, the roads were becoming less congested and the scenery becoming as beautiful as ever. In the midst of my appreciation of my surroundings I hear my phone ringing from my bag. I pickup and it is my ever watchful guardian, Kawasaki-san. He has called to give me an particularly amazing piece of news, that he has worked out transportation for me from Wakkanai (the northernmost city) to Fukuoka by plane. This is great news, because I hadn't actually planned out how I would be returning triumphantly to Fukuoka, though I knew a decent ferry system existed in Japan. Once I managed to pick my jaw up off of the asphalt and thank Kawasaki-san profusely I asked him how much I owed him for the ticket. In classic Japanese form, he told me not to worry about it. At that point I just didn't even know what to do in the face of such generosity. Here is a man to which I owe almost all of my life in Japan, yet he never ceases to amaze me with such heartrending kindness.

Kawasaki-san and I finish our conversation and I continue on my way, gliding as if on a cloud through the winding valleys of northern Japan. As soon as I reach Rumoi, I am initially buoyed by the excitement of reaching the previous days goal, I soon learn the true pain of a strong headwind. I would like everyone to take a moment and perform an experiment. You will only need 1 or 2 things, either a fan or 2 friends. If you are using a fan, put it directly in front of your face and turn the fan on full blast. With friends, have each one blow strongly into your ears. Now really take it all in, the incessant blowing. Cant hear anything else? Great. Annoying to feel it on your face constantly? Perfect. It is through this headwind that I now intimately understand how torture works. Pedaling for miles and miles with a constant wind blowing in your face is annoying by itself, but when it is also actively slowing you down, prolonging its contact with you, it is enough to drive you nearly insane.

I have chosen a town called Haboro as my resting spot. Mostly because it is just barely at my threshold for the maximum distance I wanted to travel tomorrow, and I am entirely exhausted from all this wind. For the first time on my ride, I decide to try a Japanese style Ryokan (mostly because every other place in town was full or wouldn't take me in for some strange reason). A Ryokan is like a hotel, but it is usually run out of someone's house, and is a much more intimate experience. Usually the hosts will make a bath for you and cook your meals, somewhat like a home-stay. It is much more expensive than I would like ($65 for the night, dinner and breakfast, still not too bad), but it is an experience that you can have only in Japan, so I will appreciate it.

There are only 2 other guests there that night, so I have a dormitory style room all to myself, which is a welcome comfort. At dinner we go through the usually rounds of small talk, talking shop about our rides and tips of the road. One of the cyclists gives me an alternate routing suggestion that sounds like it will really pay off.

I am very tired and worried about the long day I have ahead of me in the morning, so I am quick to say goodnight and head to my room. Tomorrow will be one of the longest rides of the trip and I sorely hope the wind is blowing in my favor!

I set off today from Sapporo feeling weary, nervous but unbelievably excited. I was so close to my final goal that I knew that nothing would stop me from reaching it, even if that meant commandeering the nearest child's bike and riding off into the sunset on my way. However, I still have about 150 miles to go and the weather is noticeably colder this far north. I begin my ride cautiously, knowing that a lot can happen in 4 days...and it's supposed to rain ALL day today.

My goal for today's ride is to make it to Rumoi, which as far as my topographical expertise leads me to believe, is truly the last stop before I am on the home stretch, cruising along 100 miles of FLAT, western Hokkaido coastline.

Most of the day is spent riding along the last truly industrial highway of Japan's north country, so it is remarkable only because the trucks here are actually larger than the trucks on the mainland. In retrospect this makes sense because Hokkaido is much more open compared to the mainland, and has room for larger roads, and thus larger trucks, but in my dreams I imagined the north country as a pleasant and persistent meadow, constantly peaceful and devoid of all vehicles which ran on gas. Some call me a dreamer.

The day was pleasantly interrupted by two nice occurrences, however. The first of which was receiving a call from my family on my cell phone. Knowing I couldn't answer whilst riding (on a highway, no less) I began looking for a quiet place to chat. To my surprise, I found the most quaintly furnished bus stop that I have ever seen in my life. The inside was carpeted and the walls were adorned with 1980's posters of the New York skyline. Furthermore, there was a potted plant and an old timey wicker broom hanging on the wall. Whether it was for cleaning or further austerity, I will never know. Had I ridden more than 40 miles already, I would've laid out my sleeping bag and called that place home for the night in a heartbeat.

Having concluded the conversation with the 'rents, I figured I might as well check my email and, to my surprise again, I found a message from a Mr. Fabio Barbieri, the other man my age riding a bike across Japan for charity. Since I had started in the south and headed north and he had taken the converse route, he suggested we meet up somewhere in the middle. It turns out the "middle" was going to be the small town of Takikawa, where we planned to meet up and exchange stories of the road.

So my plans were changed a bit, but it was for the better as I would be able to relate with one of the few other people who will soon understand exactly what it's like to try and ride a bike across a country. I begin my search now for a reasonable place to stay in Takikawa. I have recently abandoned the search for free accommodations, as a freezing cold night in a covered bathroom has taught me that the weather is no longer nice enough to offset the miserable conditions of sleeping near toilets.

After a bit of riding around and calling, I settle on a large business hotel just outside of town. As it turns out, this business hotel was essentially a large tumor that had grown on top of an extremely cozy mom and pop hotel that had once been here many years earlier. The new owners have kept all the cozy, log-cabin themed rooms tucked away in a wing, while building all of the other business-y rooms on top of them. The extremely kind girls at the counter, as well as the extremely empty hotel meant that I could have my pick of the litter when it came to room choices. I was so exhausted that I only managed to wander around the creepily empty halls and take in the atmosphere for about 30 minutes before I returned to my room and fell asleep to some Sumo in my "hometown" of Fukuoka.

Picture of the day 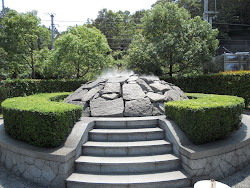 Some hot rocks. The last thing you want to see on an even hotter day